To me, photography is not just a visual art, but something closer to poetry –

or at least some poetry, such as the haiku.

PRELUDE TO THE DANCE

I have always loved words. And, reading has been a life-long passion. I remember the walks to the local library with my mother and sisters when we were growing up. Back then, the library had a summer reading program, and it was always a thrill to pick out more than a few books to check out using my very own library card. We would read them all, report on them and get stickers to celebrate our progress. I can’t remember if there was any ultimate payoff at the library for the ones with the most stickers. I do know that my love of words came well before those trips to the library.

My mother is an avid reader, always has been. When she had downtime in raising four girls, I remember her lounging on the couch with a book in her hands. She would read to us, teach us letters and words before we were even in kindergarten, and always encouraged us to read and learn something.

When I was in elementary school, somewhere around third or fourth grade, I wrote a story, “Missy the Chimpanzee,” likely inspired by the Curious George series. It had chapters, was handwritten and later typed. One of my teachers even encouraged me to send it to publishers to see if it would be accepted to become a book. It was not, but the encouragement to follow that path remains in my memory. Sadly, I lost that story (both the handwritten and typed versions), but many years ago I came across one of the “rejection” letters. I remain thankful for cheerleaders like my mother and teachers. Sometime in high school I began to write poetry. Some of it was good, some not so much. And a number of them were published in our school’s “literary journal.” These are likely stored in some box in the attic. 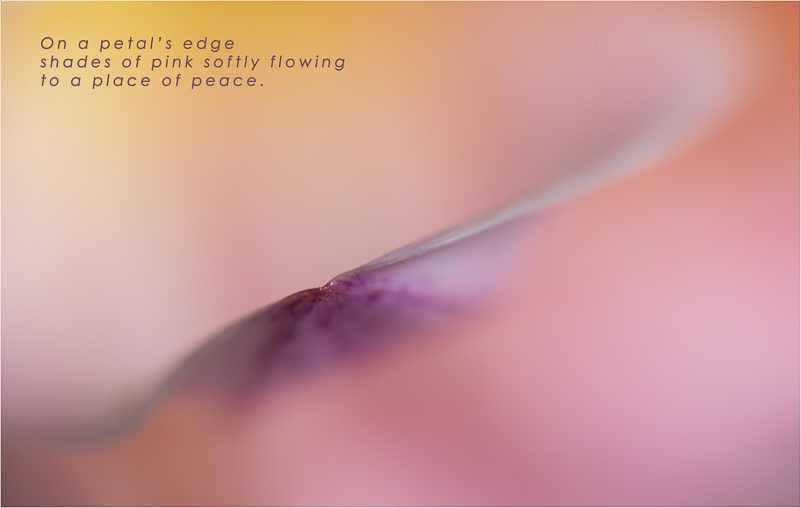 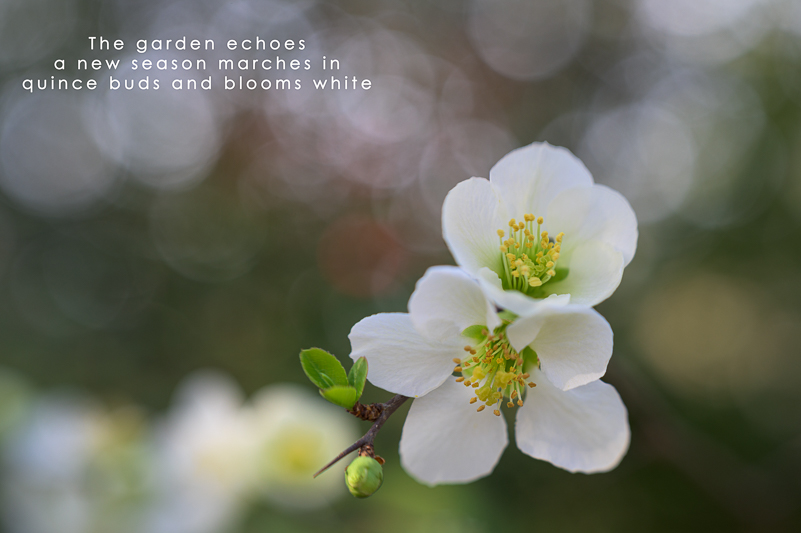 The very last haiku in this current series.

My love of reading and writing continued through college and beyond. For many years I was involved with a poetry forum – meeting and sharing writings and offering thoughts. Poetry readings of all kinds were part of my social calendar. Those gatherings are in the remote past, but the romance with words carries on. I stopped writing poetry about twenty years ago – not sure I can explain to myself or others why. Hindsight tells me that I allowed my time to be filled with other pursuits that left no room for it.

I remember feeling a bit sad at the idea that writing poetry had left me (or I it). And, then, I realized that poetry had simply found another home. I realized that it lives in my images. The lyrical and poetic nature is not in every image I make, but the essence and roots of poetry on some levels are in varied forms. No words, just visuals. 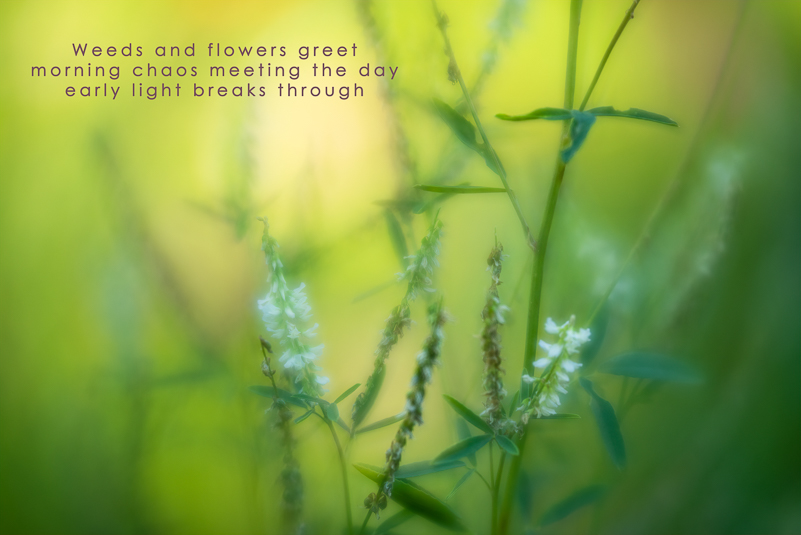 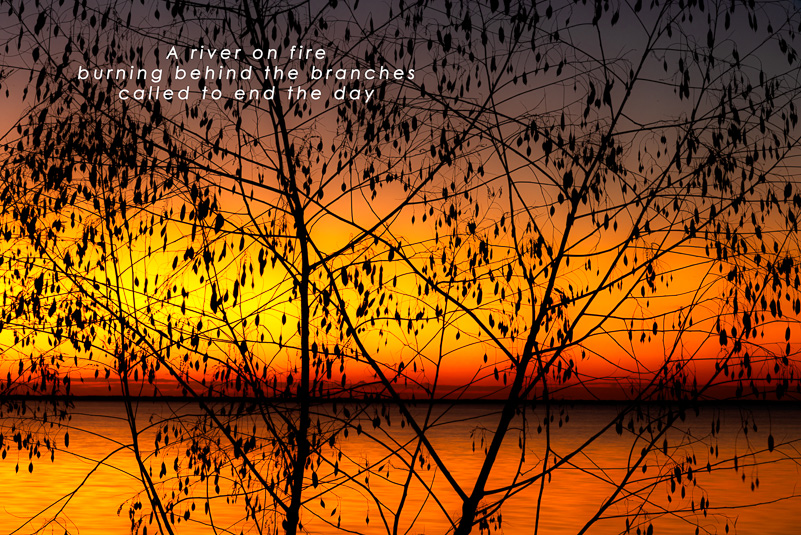 Given the backstory, combining images and words would seem like a natural thing. I do love inspirational quotes, so that might have been a good place to start. However, I wanted more work to do besides pairing images to other people’s quotes.

When I’m searching for ideas to share in my blog, I’m also looking for ways to challenge myself and, in the process, learn something. I’ll save some of the ideas I had for another day, but the idea of essence and quiet kept coming to mind. Then, how could I marry my love of words with images? Again, pairing quotes with my images just seemed too easy.

That’s when I thought of haiku. The challenge in this form of poetry is its “bare bones” nature. I did some poking around to learn more and decided to accept the challenge. I have never explored this genre with any depth and, admittedly, even for this exercise I know I am only scratching the surface. I will go deeper later… Meanwhile, to write each haiku, I had to select the images and then focus my mind on the essence of each one as it spoke to me. I had “only” three lines to write. There is a form and structure to haiku, some “rules” for me to follow. I figured I could do this. 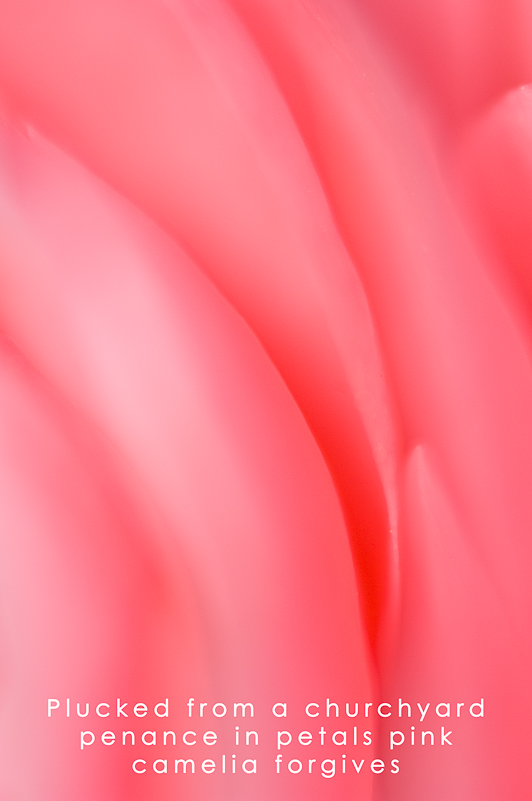 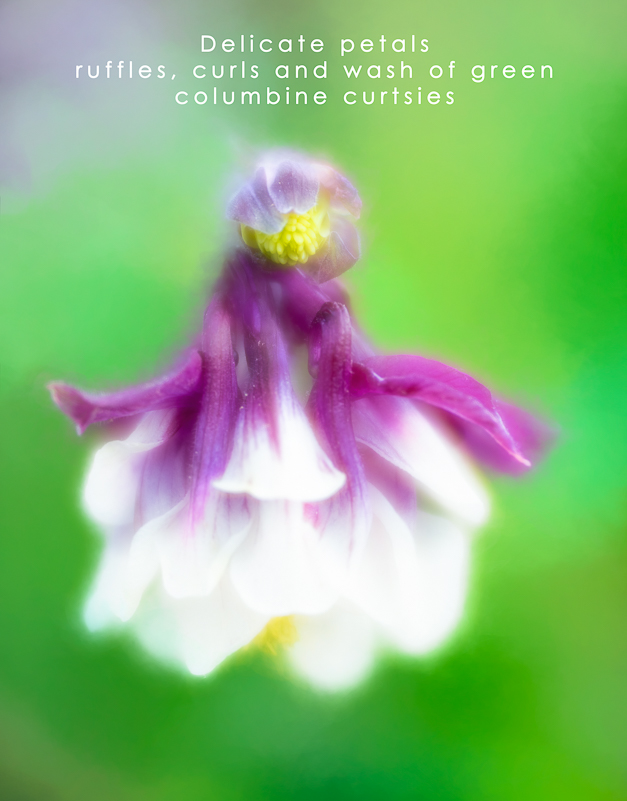 AND, WHAT IS HAIKU, ANYWAY?

Haiku is a form of poetry that has its roots in Japanese literature going way, way back to 13th century Japan as the opening part of a longer poem called a renga. Around the 17th century it became a separate form of poetry. Among the more prominent Japanese haiku poets were Basho, Busson and Issa. Basho is credited with popularizing this approach, and many of his haiku reflected an emotional connection or response to nature. As the form gained popularity, it took on various forms. The “American haiku” form, a lune, was created by poet Robert Kelly (three lines, 13 syllables and typically 5 in first line, 3 in second and 5 in the last line). Another poet, Jack Collom adapted the lune format to have the same three lines, but made it word based (3 words, 5 words, 3 words), not syllable-based.

The traditional Japanese haiku consists of three lines with a total of seventeen syllables and follows a 5-7-5 syllable count (5 on first line, 7 on second and 5 on last line). In its early appearances, the haiku made mention of the season, time of day and dominant features of the landscape. It expressed moments in time and in nature. Keep in mind that Japanese words tend to have more syllables than English words. Therefore, translations can vary when going from Japanese to English.

In this exercise of creating visual haiku – in the writing of the poems, I have followed the traditional format. I chose not to use any punctuation. I am certain that given more time and deeper dives, I will be able to create more meaningful poems that might even stand on their own without the visual assist of an image. 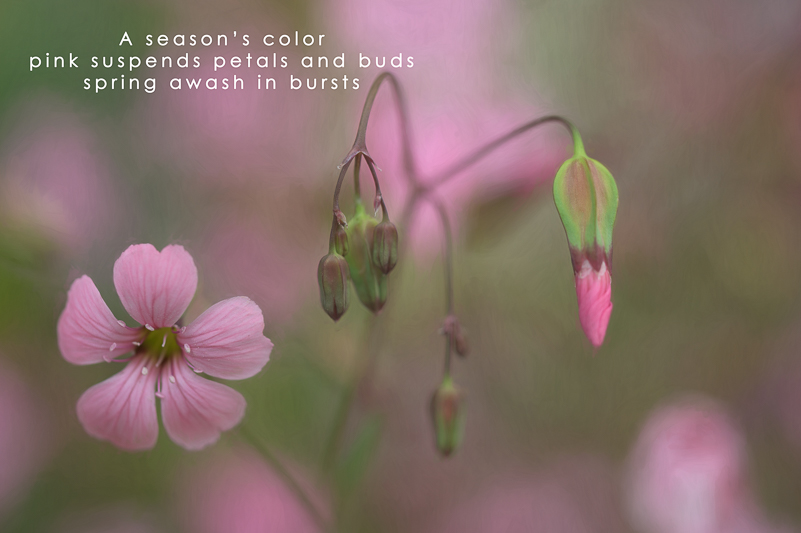 VISUAL HAIKU AS A BLEND OF TWO ART FORMS

As you might imagine, a visual haiku combines an image with a short poem, the haiku. The idea is to reduce the subject down to more simple forms, to the essence of the moment. Typically, this might be an intimate landscape or even an image of a single subject. From my limited time with this exercise of creating the visual haiku pairings, I found that images with a level of negative space worked better than those with great detail.

As you examine my work in this sharing, you will see what I mean. I have included a few images with haiku that aren’t as successful in expressing the simplicity as others. I found that horizontal images worked better than the verticals, mostly for the “space” as well as for the more restful feelings they give. A vertical image needs to be, in my experience, much more boiled down. The subject, while interesting, cannot fill the frame if it is also filled with textures and patterns. As a side note, I have chosen to share seventeen visual haiku as a nod to the syllables. 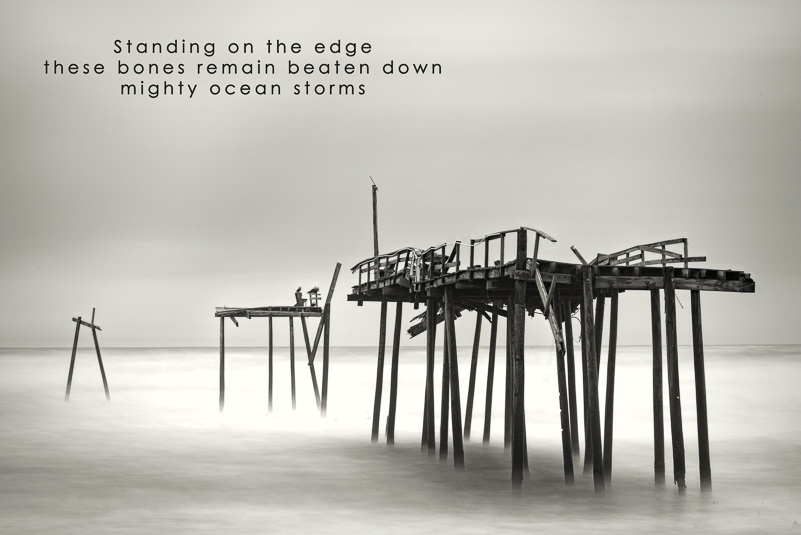 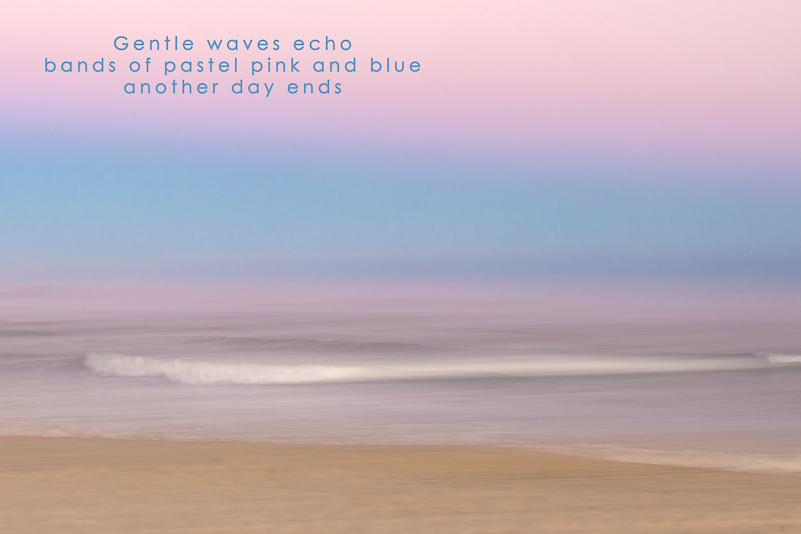 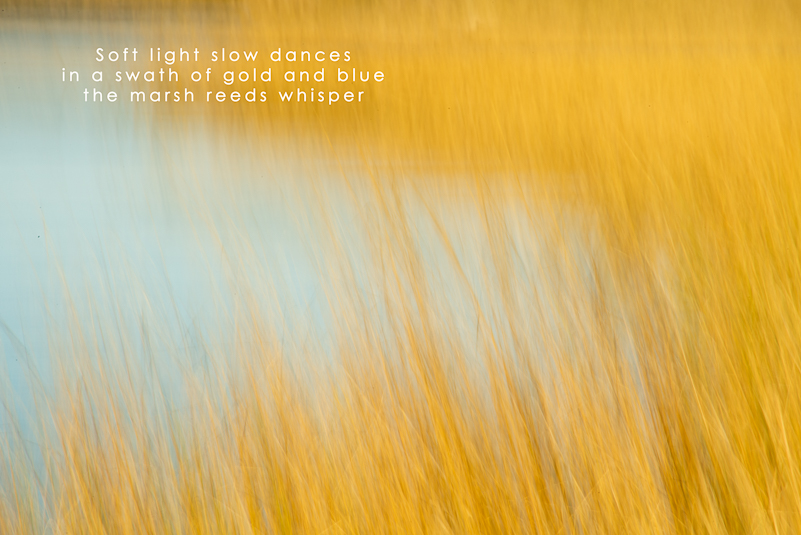 LESSONS IN THE BLENDING OF TWO PASSIONS

We started this with my sharing how I love words, and reading and writing and poetry. I’ve shared how I thought I lost my poetry when I moved more intensely into photography, and how I realized that this was not true. I have a passion for the intimate details and poetry in nature, and many of my images express that without words. What a gift to challenge myself to blend MY words with my images and force myself to use the traditional haiku format. If you’ve read any of my writings, you have to know that haiku is restrictive and forces me to constrain and contain myself and my words. It forces me to edit brutally and to count every syllable. It is an exercise in refining. And, yet, those three lines, much like our images, can say so much more with so much less.

If you’re looking for a challenge, give this a try. Select a series of images to consider the “essence” of each. Then, put your words to the page. Be sure to choose a quiet space and time for this exercise. Connect with the moment each image brings you back to. Perhaps you will recall the “why” of each, what made you stop, what you connected with. Go there. Then, come back and write your words. 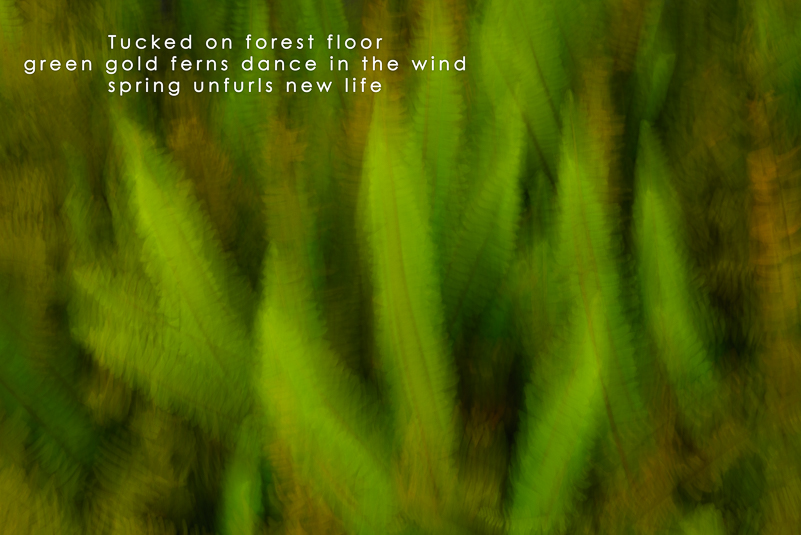 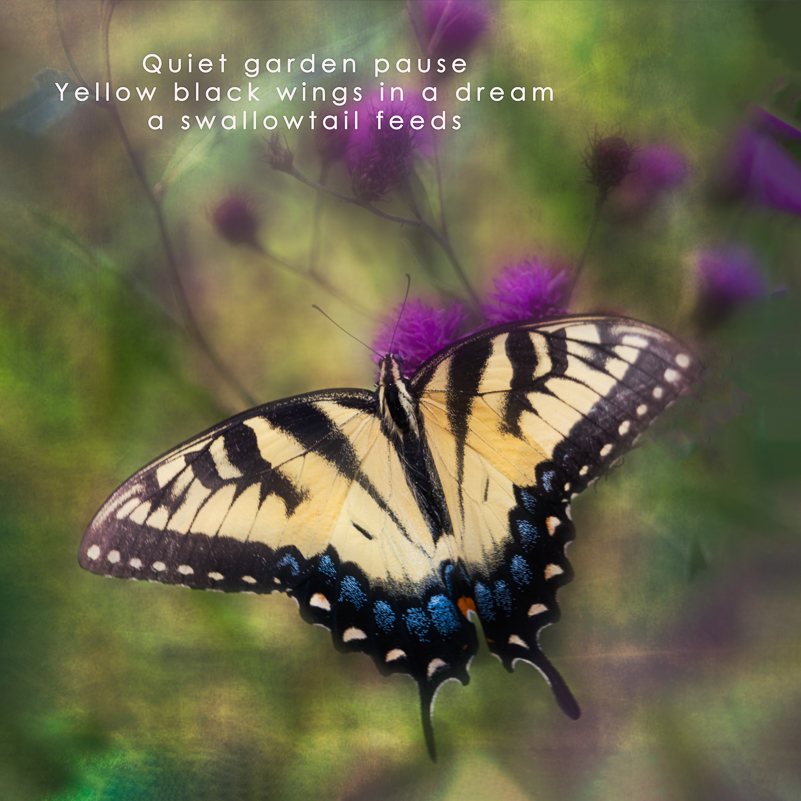 I will end with a nod to where the haiku began to grow … Enjoy.

“The  Old Pond” by Matsuo Basho

A frog jumps into the pond 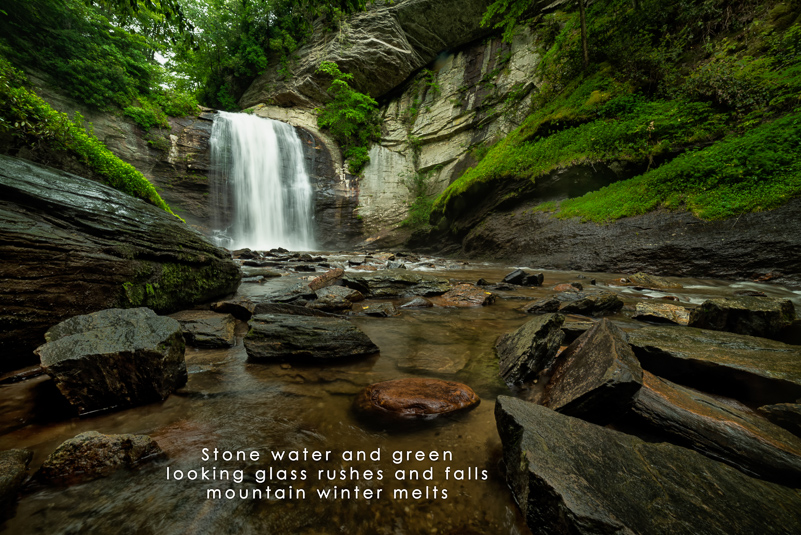 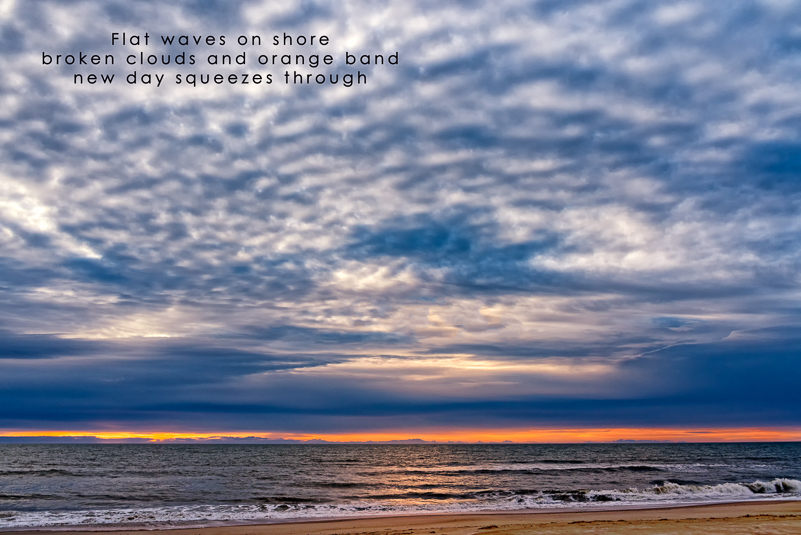 Showing the Need for Negative Space 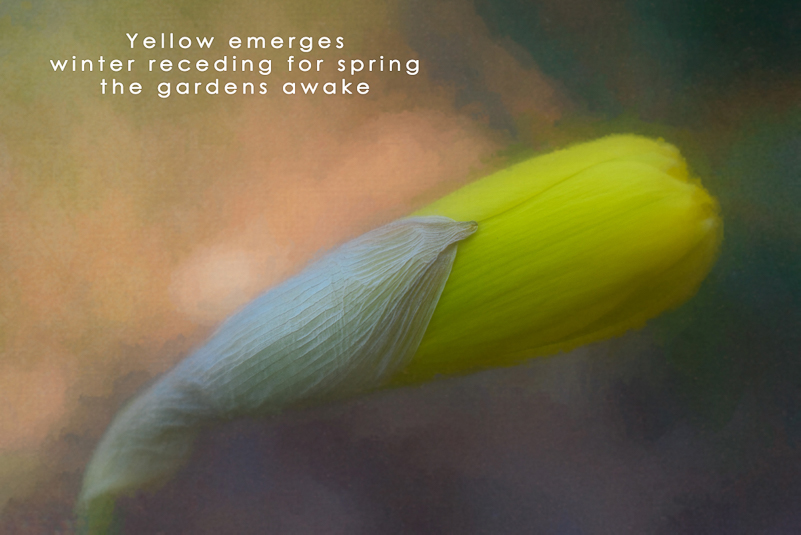